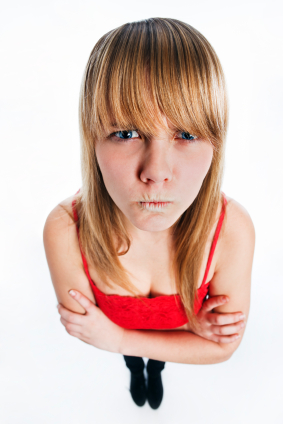 Imagine. Life is just humming right along that is…until 13-year-old Abigail asks to stay out until midnight.

Seems some of her friends have planned to hang out at a local movie theatre. According to her, everybody will be there and leaving before midnight would totally make her look like a major loser.

You, however, have a firm curfew of 10:30 pm.   She begs, she pleads, she cries but you don’t waver.  Desperate she pulls out the big guns and pops off with, “I hate you. You never let me do anything! I want to go live with Daddy.  He doesn’t treat me like a baby.  He would never have a problem with me staying out until midnight.”

Your first thought… “Oh no, you didn’t.”

When a relationship ends there are a lot of things parents find unsettling, overwhelming and downright scary. However, nothing strikes fear into a divorced parent’s heart like hearing, “I hate you. I want to go live with my other parent!“

More often than not those words are uttered in the heat of the moment. Maybe you’re having a disagreement over how clean a bedroom really needs to be or perhaps you’ve been told in no uncertain terms how lame you are because you won’t say yes to rated “M” (for mature) video games.  Kids may tell you how they covet the multitude of freedoms they have when they are with Dad or how very cool Mom is because she lets them text at the dinner table.

So what do you do when your little bundle of joy demands to live fulltime with their other “more fun” parent?

Be mindful that every self-respecting kid at one time or another will test the waters. When kids are angry or upset about a rule being enforced, they may use the threat of changing households as a way to get you to back down.  For other kids, hitting you where they know it hurts, is just another way of acting out their anger.

Whether it’s to gain an upper hand or to show you how really pissed off they are, do your best not to take what your child has said at face value.

Most kids have cultivated a special talent for pushing just the right buttons. While you may not mean it, take care not to counter your child’s angry outburst with one of your own.  Let’s take another look at Mom and Abigail’s fall out.  Suppose when Abigail spouted off “I hate you and your stupid rules!” Mom replied with “ Well, if you don’t like it, then maybe I should send you to live with your Dad! After all why should I get all the fun?  Let’s see how he likes dealing with the drama.”

Okay, let’s be honest. Who hasn’t secretly fantasized about shipping their child off when they are in the throes of a temper tantrum or emotional meltdown?  While fantasizing is fine, using a shape up or ship out threat typically results in more problems. First, it sends a pretty clear message that you don’t have control. Keep in mind, when kids figure out you don’t mean it (and most of us don’t) chances are they aren’t going to value or respect the other issues you take a stand on in the future.  Second, it’s quite possible your kids may also interpret “I’ll just send you to live with Dad” as your love is conditional (i.e. “Do what I say or you’re out of here.”). Either way it compromises your credibility as a parent.

As hard as it may be, don’t match your child’s anger or engage in a discussion about changing the living arrangements. Even though you may be seething, do your best to give the appearance of being calm and collected.  If needed, take a deep breath before addressing your child’s request in a matter of fact way.

To illustrate let’s revisit the Abigail scenario. Instead of Mom raking Dad over the coals for being an irresponsible parent, she decides to take a step back.  In her most sincere, calm and cool voice she says to Abigail “I’m glad to hear Dad understands you and that you feel comfortable with the rules in his house. However, in this house we have different rules. Talking about where you live when we are having a disagreement isn’t a good idea. When things have cooled off, if you’d still like to talk about changing things let me know and I’ll make time for us to discuss it further.”

On another note, if you find you’re having a strong reaction to what your child has said, it’s probably best to put things on hold.  Odds are nothing good will come out of talking to your child when you’re feeling hurt or angry.  Instead, let your child know you need some time to think about what has been said and step away from the situation. Consider going to another room or taking a walk outside. Once you’re in a better place, give thought to what set you on edge and how you want to address the issue with your child.

Have an open mind

If you have a more traditional parenting schedule, be aware that at some point your kids may want to know what it would be like to spend more time in the other parent’s home. When children express a sincere interest that is not motivated by anger or upset, as parents, it’s important to pay attention to that.

Whether you are under one roof or two, as our children’s needs change, so must our parenting. For example, it’s very normal for a teenage boy to crave more day-to-day contact with his father.  A young girl transitioning into her tweens may really benefit from spending extra time with Mom. Although it can be scary as hell to think about changing your parenting arrangement, do your best to keep an open mind.

When have you heard the words, “I want to move out and live with my other parent!” If so, what did you do to head off your child’s angry outburst?  Have a story, tip or comment to share with other parents, feel free to post below. Look forward to hearing from you.

Feel overwhelmed by divorce drama? Exhausted by ongoing conflict? Worried that you’re kids won’t be okay?  GET solutions and support at  divorce and children or check out my book Parenting Apart: How Separated and Divorced Parents Can Raise Happy and Secure Kids.  Have a question or comment? Join our growing parent community on Facebook or  follow me on twitter.