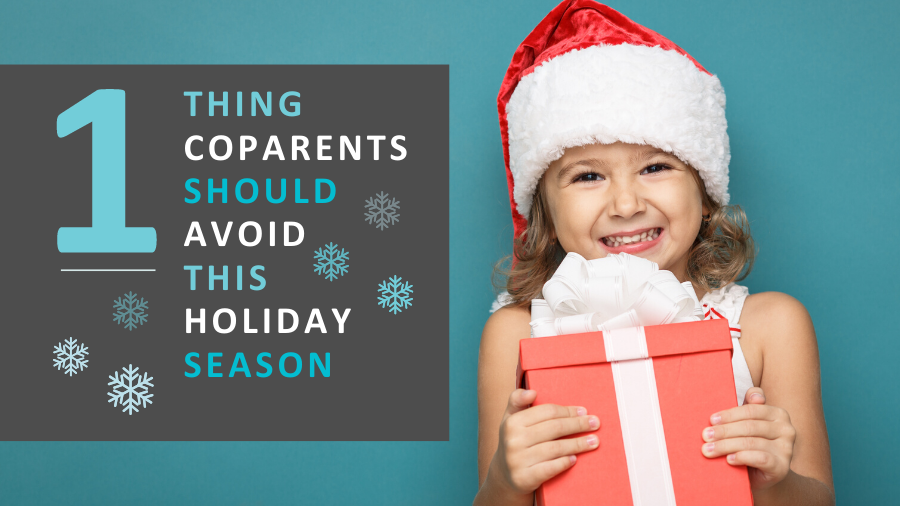 HANDLING HOLIDAYS AFTER DIVORCE AS COPARENTS CAN BE TRICKY.

The holidays are here. Although it’s meant to be a warm and fuzzy time of year when goodwill prevails, sadly for many coparents, the reason for the season transforms into a vicious game of “one-upping.” If  “one-upping” isn’t part of your day to day vocabulary, it basically translates to “Anything you do for the kids, I will do better.”

While it didn’t happen over the holidays, Stacey and Eric, a couple I worked with a few years ago, always come to mind as a perfect example of what not to do.

Stacey was absolutely livid. So angry she was screaming on the other end of the phone “DO YOU KNOW WHAT THAT SON OF A B*TCH DID? HE CHEATED ME OUT OF A ONCE IN A LIFETIME MOMENT.”

Whatever her Ex, Eric had done, it clearly had pushed Stacey right over the edge. I braced myself for the big reveal.

What exactly had sent this mom into a blind rage you ask?

You might be thinking, okay, seriously? It’s not that big of a deal. It’s a just tooth, right?

However, for Stacey and Eric, EVERYTHING was a VERY BIG deal from the word go. Sadly, the two of them had been going at it ever since the split. Even worse, they put most of their energy into trying to “one-up” each other at every turn. Anything they could do to make the other parent look bad, they did.

According to Stacey, when Bailey lost her tooth, she asked her Dad if she could take it home to Mom’s house.

Any guesses about how Dad handled Bailey’s request?

Eric told Bailey that the Tooth Fairy was much better at Dad’s house, and if she wanted to make the Tooth Fairy happy, she should really put her tooth under her pillow at his home.

AND boy did the Tooth Fairy deliver. When Bailey woke up the next morning, she found a crisp $20 twenty-dollar bill under her pillow. Quite a return for a first tooth!

As you might expect, Bailey was over the moon and called Mom right away to tell her the big news. Instead of sharing in Bailey’s excitement, Stacey went off like a bottle rocket and began interrogating Bailey about why she didn’t wait and bring the tooth to her house. After all, that was her REAL home. When Bailey told Stacey about Dad’s comment, more fireworks ensued.

In the end, Stacey decided to resolve the issue by sliding another $20 under Bailey’s pillow at her house. When Bailey returned, Stacey told Bailey, “See…the Tooth Fairy is just as good at Mom’s house. Next time save your teeth and make sure they go under your pillow here and not at Dad’s. We don’t want to upset the Tooth Fairy.”

While Bailey scored $40 bucks out of the deal, one can only imagine how incredibly confusing and uncomfortable this whole “Tooth Fairy” ordeal must have been for her. AND how much more uncomfortable and confusing life between her two homes was going to be in the future.

While I’d love to tell you as a divorce coach, I don’t run across situations like this often, the truth is the issue of “one-upping” happens ALL THE TIME.

Sometimes it involves both parents competing to prove who’s the “best” parent. Other times, it’s one parent looking to tip the scales in their favor and show up the other coparent.

Many times, I run across coparents who don’t want to compete at all. Instead, their struggle is how to handle the “Excess Express” that seems to be running 24/7 at the other parent’s home.

Sadly, situations like this tend to ramp up in a BIG way during the holiday season. Times that should be marked with special memories for kids end up getting contaminated with tension, stress, anxiety, confusion, and conflict.

If you’ve ever struggled with a competing coparent or occasionally have an urge to splurge and even the odds, here are a few tips worth considering.

HOW TO AVOID BEING A COMPETING COPARENT DURING THE HOLIDAY SEASON

Be clear about your “why.”

I get that your situation may be very different than Stacey and Eric’s. However, the temptation to want to be THE PARENT who gives the BEST gifts (or makes an event the MOST SPECIAL) can be tough to resist.

After all, what parent doesn’t want to do nice stuff for their kids? Right?

While there’s nothing wrong with making occasions memorable or giving your kids nice things, make sure you’re clear about the intention behind the gift or gesture.

When considering options, get honest with yourself. Think through the “why” behind your gift and how giving this gift will impact your child. It might also not hurt to consider how it will affect the other household. Imagine, you have the means to give your child an expensive gift, but your coparent’s finances are limited. How might that make your child feel?

Keep in mind that parents aren’t the only ones who are impacted by these differences. Kids are often very sensitive to situations where one parent has more and one struggles.

To head off a potentially uncomfortable situation, you could approach the other parent about giving bigger gifts jointly. If finances are an issue, propose splitting the cost 70/30 or 60/40 instead of 50/50.

While it’s not your responsibility to compensate for the other parent’s financial situation, consider the message you’re sending to your children. First, joint gifts remove potential anxiety for kids about differences between households. It also sends a pretty clear message to your children that they matter more than any feelings you have towards each other.

WHAT TO DO IF YOU HAVE A COMPETING COPARENT

If you have a competing coparent and struggle with wanting to keep up, resist the impulse to even the odds. Instead, circle back and re-examine your values.

While the lure of “stuff” can make any self-respecting kid swoon, the novelty often wears off fast. What tends to have staying power, however, are thoughtful gestures and points of connection.

Do your best to stay focused on your values, what you believe is best for your kids, and not on what the other parent spends. Will it always be an easy thing to do? Absolutely not. There will be times when it will take a tremendous amount of restraint not to go there.

When Mom takes the kids on a dream vacay to Disney, and the best you can do is a weekend at a state park, it’ll probably feel pretty unfair and crappy.

Suppose Dad has set his house up with every gaming system gadget known to man. It may really suck to be the house that is without.

Keep in mind, the goal is to play the long game. Over time kids get wise to a parent who tries to “buy” their love.

Remember, what matters most to children isn’t the presents they are given but your presence in their lives.

Keep it to yourself.

When you see your child’s eyes light up over a lavish gift from the other parent, it can take every ounce of self-control not to share your opinion about “said” gift. Especially when it doesn’t align with your values or feels like a blatant attempt to make you look bad.

Although it can be super tricky, do your best to control your reaction and not rain on your child’s parade.

Think about it this way… imagine your boss gave you a brand new shiny red car for being a valued employee. Incredibly excited, the first thing you do is show it to your coworker.

Suppose your coworker’s response was less than enthusiastic, and they started drilling you with questions like…” Why did they give you a red car? I thought blue was your favorite color.” “Why did your boss pick such an expensive car? It seems a little over the top. Couldn’t they have gotten you something that was more reasonable?”

You get the picture.

Hearing your disapproval or side comment is not the best way to highlight your values. AND chances are sharing your POV will only leave your kids feel lousy.

Keep in mind, children are extremely sensitive to how their parents feel. When they sense your stress or upset, they often sidestep issues by filtering what they say or avoid sharing things with you altogether. Is that what you really want?

Okay, I realize a lot of this may come off as a little idealistic to some coparents.

There may be times when putting some of these suggestions into action may even feel damn near impossible.

In some situations, cooperation or consideration from the other side may not be realistic. You might have a coparent that is hell-bent on showing you up. Perhaps you have one that’s determined to give children everything and anything they want.

It may be the best you can do is not make the holidays any harder for your kids.

No matter what the other parent does, you keep doing you and stay focus on your children. Although it may not feel like it right now, in the end, it makes a bigger difference than you realize.

BTW – if you’re looking for other holiday suggestions and tips, I listed a few links below that may come in handy.

Handling Holiday Hassles With An Ex Who Hates You

PS – If you’re feeling alone and overwhelmed by your divorce or maybe you have a coparent who is determined to make life miserable,  consider taking a peek at my brand new online course. I developed it to help parents, just like you, get the help you need to make life better for you and your kids.

Sending lots of love, holiday wishes and joy your way.