Are we throwing the baby out with the bathwater? 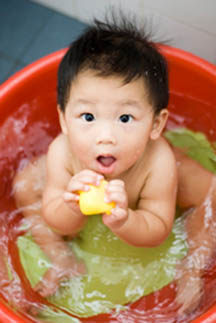 I consider myself a pretty laid back kind of gal. However, there are a few words that have a permanent place on my “words I wish never existed” list. Words like residential parent, non-custodial parent, visitation, contact, custody, contact arrangements, custodial parent and possession make me cringe. Clearly, I’m no fan of “legalese. Never have been, never will be.
From where I stand, when parents split, children have every right to feel a sense of connection, of family and belonging with each parent. As a result, I’ve been a relentless advocate for rejecting court-based language and the ideology that comes with it. Instead, I encourage parents to rethink their post–divorce parenting relationship and adopt what I call a “two home” concept.
Provided that safety is not an issue, children deserve to have each parent remain actively involved in their day-to-day lives. So you’d think that I’d be overjoyed by Tennessee’s new radical proposal…right? Wrong.
I have to say while the intention to keep both parents engaged is honorable and long overdue; legislators have once again missed the boat.
Successful post-divorce parenting is not about equitably dividing the minutes and hours of children’s day-to-day lives. While time between parents should be frequent and consistent, quantity should not overshadow the need for quality. And it should definitely not take precedence over placing children’s needs at the forefront of this process. For several decades, when parents haven’t been able to work things out on their own, courts have pretty much implemented a cookie cutter approach. One size fits all, regardless. This kind of thinking has perpetuated an ongoing imbalance in post-divorce parenting relationships and children have suffered. Yet, going from one extreme to the other isn’t the answer either.
According to a recent article in USA TODAY (http://bit.ly/d1xZV9) if passed, when parents can’t agree on arrangements, proposed Bill 2916 will automatically split children’s time equally between parents, unless of course, one parent is deemed “unfit.” Am I the only one who sees where this might lead?
Currently, family courts everywhere are overflowing with custody cases and endless amounts of litigation over which parent is more capable. If parents are told the only way around a 50/50 split is to prove the “unfitness” of the other parent, how many parents will respond by digging their heels in and duking it out in court? Not to mention, what about cases involving more insidious issues such as parent alienation? Will the result be an increase in unfounded cases of abuse?
Certainly, I’m not suggesting that 50/50 time sharing agreements can’t work. However, in order for those arrangements to be a positive experience for children, parents need:
• High degree of cooperation
• Strong communication and conflict resolution skills
• Ability to provide children with similar rules and structure between households
• Commitment to supporting one another’s relationship and shielding children from conflict
• Live in close proximity to one another
I don’t believe telling parents to play nice and share is going to do the trick. Let’s face it; parenting is stressful. Statistically speaking, marital satisfaction typically declines once children arrive on the scene. More often than not there’s pent up resentment, more conflict and more emotional distance as the demands of parenting take a toll on a couple’s relationship.
So what happens when parents are no longer a couple? What keeps them invested in making their parenting relationship work? Given that parent conflict is one of the most damaging aspects of divorce for children, it’s quite possible what was intended to be a good thing might end up exposing children to more arguing and fighting.
While the majority of couples have the potential to co-parent effectively, they often need help and guidance in the early stages of separation. I sincerely hope lawmakers are taking into consideration that, for the vast majority, establishing a cooperative relationship doesn’t come naturally. Yes, some families do handle 50/ 50 time sharing arrangements remarkably well. When that happens, children benefit tremendously. Chances are, however, those families were probably already headed in that direction without court guidance. For other families, various levels of intervention and support are a must.
Is there an answer to the conundrum of post-divorce parenting? I believe there is. Instead of force-feeding solutions, court systems need to be more responsive to the individualized needs of families.
Successful post-divorce parenting should support:
• Both parents as an active presence in children’s lives
• Both parents as valued and essential
• Parenting roles as interchangeable — not fixed (regardless of how much time is spent with children)
• A sense of family and belonging (children and each parent sharing a life together)
Court systems need restructuring. In order to achieve a quality, conflict-free life for children, first and foremost, children’s needs must be taken into consideration. In truth, rarely do married parents spend exactly 50/50 time with children. When creating workable arrangements for children, parents and courts should take a look at what life was like for children before the marriage ended. If Dad was the one who picked children up every day after school, how can that connection be maintained? If Mom is the leader of Suzie’s brownie troop and attends every Wednesday meeting, parents should be encouraged to make sure that happens. Regardless of the changing marital status, family bonds need to be respected and protected.
If Tennessee is truly interested in being the home of the “most gender-neutral and revolutionary” child custody law in the U.S., then my advice is to dump HB2916. Go back to the drawing board and create a piece of legislation that discourages the pursuit of “unfitness” and battling it out in court. Give parents the tools they need to place their children first by supporting parent education classes, promoting successful mediation, collaborative law and connecting them to quality resources. Abandon your “King Solomon” mentality, children deserve better.
Whether you agree or disagree, love it or hate, what are your thoughts about how children should share time between households?
Until next time,